St. Maarten has long been on my bucket list not only because it offers tropical beaches, but because it feeds my insatiable appetite for all things aviation. So when I was invited on a press trip to cover the development of the Princess Juliana International Airport (SXM), I jumped at the chance. I knew I was in for a beachside adventure but had no idea further adventures awaited at neighbor islands St. Barth’s and Sabo — but more on that in a later post.

A KLM 747 just above the heads of travel and aviation journalists. Alain Duzant.

The SXM runway is literally several feet from Maho Beach and landing aircraft come in to Runway 10 several meters above the heads of sunbathers bobbing calmly in warm, blue-green waters of Maho Bay. The scene is captivating even to those who would otherwise not give aircraft a second thought. After all, we don’t normally get to be this close to aircraft in flight. 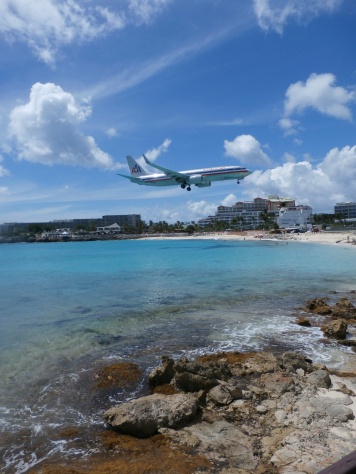 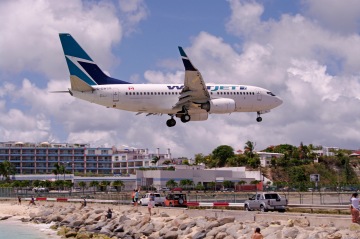 “People are aviation enthusiasts without even knowing it,” Sheldon Palm, who runs a fixed base operation serving private jets at the airport. “They see a plane and think, no big deal. But then they come to Maho Beach and the light dawns. I always have to chuckle when I see their reaction to a large jet landing so close.”

Indeed, Palm can often be found at the world renowned Sunset Beach Bar where flight times are posted on — what else — a surf board planted upright in the sand. The wide variety of large and small aircraft landing repeatedly distracts patrons as they grab a mouthful before popping up excitedly to get a shot of the latest aircraft on approach. This is no beach dive. Sunset Beach Bar @sunsetbeachbar not only offers great waterside and airside views but really delicious food.

Maho Beach, too, is world-renowned in AvGeek circles. Long ago, the History Channel made it even more famous by including it in a collection of the most extreme airports naming it the fourth most dangerous airport in the world. That, I think, was dramatic license. In reality, SXM landings and takeoffs are far from dangerous with a 7,500-foot runway and a safety record to match the best in the world. Even the largest jets can handily make the turn required to avoid the mountains on take off. Still, the low approach and easy access to get spectacular photographs make it a plane-spotters paradise.

A tiny, narrow roadway separates a thin strip of sand from the chain link fence surrounding SXM. When the KLM and Air France wide bodies are on approach, crowds gather on the rocky beach and at the fence and drivers carefully navigate the gawkers who are otherwise distracted by a huge aircraft roaring just above their heads. Luckily, we were there in the low summer season and the crowd was manageable. But, locals report that in the high season the place becomes a zoo as tourists push and jostle their way to just the right spot.

That first day, we gathered in a darkened boardroom for a briefing with SXM Director Regina LaBrega, speaking in low tones about the ambitious and impressive expansion plans for the airport. As 10 am approached the 10 travel writers and aviation journalists launched from their seats. It was time to interrupt the briefing for a quick side trip to Maho Beach for the 10:45 KLM 747 landing. We all bundled into Taxi 322 for the five-minute trip and excitedly tumbled out, shielding our eyes from the bright morning glare. With cameras in hand, we were ready for action.

A strong wind blowing from the east greeted us as we scrambled among the rocks placed to maintain the beach during the summer season when sand is eroded away. Unashamedly, and despite numerous warning signs, we climbed the fence to take pictures of departing planes and the looming mountains they must climb as they take off. It was AvGeeks on parade as the cars struggled to pass.

Most pay little attention to the danger warnings. For that reason, the airport moved runway touchdown/takeoff a little further east so gawkers would not get literally blown away in the jet wash. Still that does not stop InselAir from giving gawkers a thrill by revving up its jet engines near the fence. Miquel Ros

Then all eyes turned west as an old Amerijet Cargo Boeing 727 approached, providing us with a great practice run for the main event. It closed in on us, dropping lower and lower and screamed so loudly as it passed overhead vibrations tickled the inside of my ears. It was all I could do not to reflexively duck.

A few minutes later, the KLM 747 approached as a tiny speck in the Western sky. We positioned ourselves and it seemed like forever before that tiny dot loomed into one of the largest aircraft in the world. All of a sudden, however, it was upon us, roaring overhead, a ground-shaking rumble compared to the high-pitched scream of the 727. It seemed so close you could almost reach up to touch the drooping undercarriage.

The KLM “speck” appears about frame 50. The audio of this film does not capture the magnitude of the experience. My pitiful attempts at getting good footage were dismal so I am unashamedly poaching from my colleagues with due credit, of course. Video courtesy Chris Kjelgaard, Airlines & Destinations

There was laughter and giggles as we compared notes and immediately checked to see if we captured the mighty event on video. Wow, it was better than we expected, surpassing every inch of dramatic hype we’ve seen over the years. Too soon we were back in that darkened boardroom at SXM, windblown and chattering like excited children. As we returned to business we knew we would be back out there. Lunch was scheduled for the Sunset Beach Bar.

After tours of the airport and the air traffic control tower as well as briefings on air traffic services and how the airport prepares for hurricanes, it was time to head back to the hotel. The hot, sticky, sweat-drenched day had taken its toll and all I could think of was peeling off my clothes at the Sonesta Ocean Point where we stayed. In record time I was jumping into Maho Bay. As I bobbled along in the gently rolling, blue-green surf, a US Airways 767-200 took off overhead, the only aircraft to use Runway 28 for takeoffs owing to its high weight. As it roared by and I floated on my back to watch, I realized it was the perfect capper to the first of many hectic, sun, sea, surf and sky days.

Here’s a KLM takeoff from SXM.

One thought on “St. Maarten: One of the Few Places in the World for this Beach Adventure”